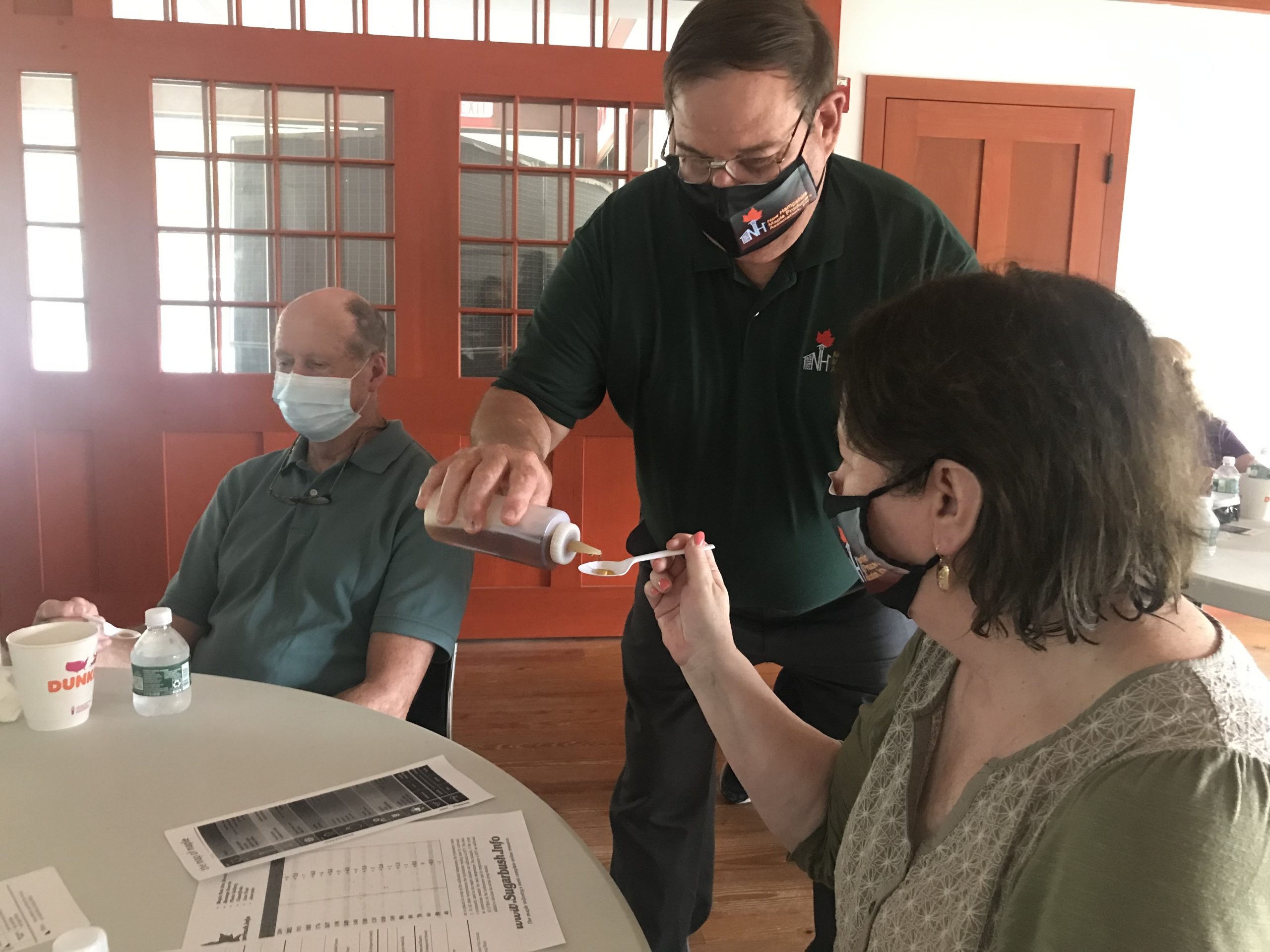 On Saturday August 14, a small contingent of members of the New Hampshire Maple Producers Association gathered for the 2021 Summer Meeting at the Hubbard Gallery within the Shaker Village in Canterbury.

President Dave Kemp kicked off the meeting by welcoming attendees and introducing Jason Lilley, of UMaine Extension, who gave a presentation entitled Maple Quality Control. Lilley said there are many reasons a syrup sample can be disqualified from judging, most of which are avoidable if sugarmakers keep some basics in mind.

Lilley discussed the four areas of maple grading and what can go wrong within each area. For density, he spoke about the need for accurate tools, like the hydrometer, and gave some tips to ensure sugarmakers are using theirs properly. He led the group in some math calculations for temperature correction and shared with the group an online temperature correction card that can help with the math calculations. Next, Lilley discussed syrup color. One of the key points he mentioned was if syrup color is close between two options, it should be given the darker grade. Regarding clarity, Lilley noted how proper filtering is critical. And after discussing flavor, Lilley “treated” the group to some syrup tasting. Some in attendance might not consider the samples a treat! Lilley shared additional resources related to flavor and taste: Off-Flavors as well as the Map of Maple from the University of Vermont.

Lilley let the group know there would be a maple grading school after the International Maple Conference in Niagara Falls NY in October for anyone who might want to extend their trip.

Following Lilley’s presentation, the group heard some updates on Association business. Bud Taylor spoke about the upcoming Big E and Deerfield Fair. Because there was not enough interest from members in staffing the booth at the Big E, Taylor was in touch with Gail McWilliam Jellie from NH Department of Ag, who was going to look into the possibility of hiring a concessionaire so the maple industry still could be represented at the event. For the Deerfield Fair, workers are still needed (September 30 through October 3), and anyone interested can contact Taylor directly. Taylor also brought along the boxes of Association apparel, including t-shirts, fleece jackets, and hats for anyone who might be interested in purchasing them. Also if anyone had suggestions for other items they might be interested in purchasing, they could make a request. For NH Eats Local month, the kick-off event was held on August 1 although a representative from the Association was not present. Kemp shared an update from the container committee. There was a question about the possibility of making the brochures for distribution at the highway rest areas. Stephanie Kelly from MAC/FC said the Promotions Committee had one meeting last month and meets again this week. The Committee did not discuss this project yet but will, along with a number of other projects. Kemp spoke about the Maple Museum, which has been inaccessible because of work being done at the Rocks Estate in Bethlehem. The Board is hoping to hold an in-person meeting there when the facility is reopened.

After business was discussed, the group headed downstairs in the Hubbard Gallery for lunch
before being led on a special tour of the Shaker Village.