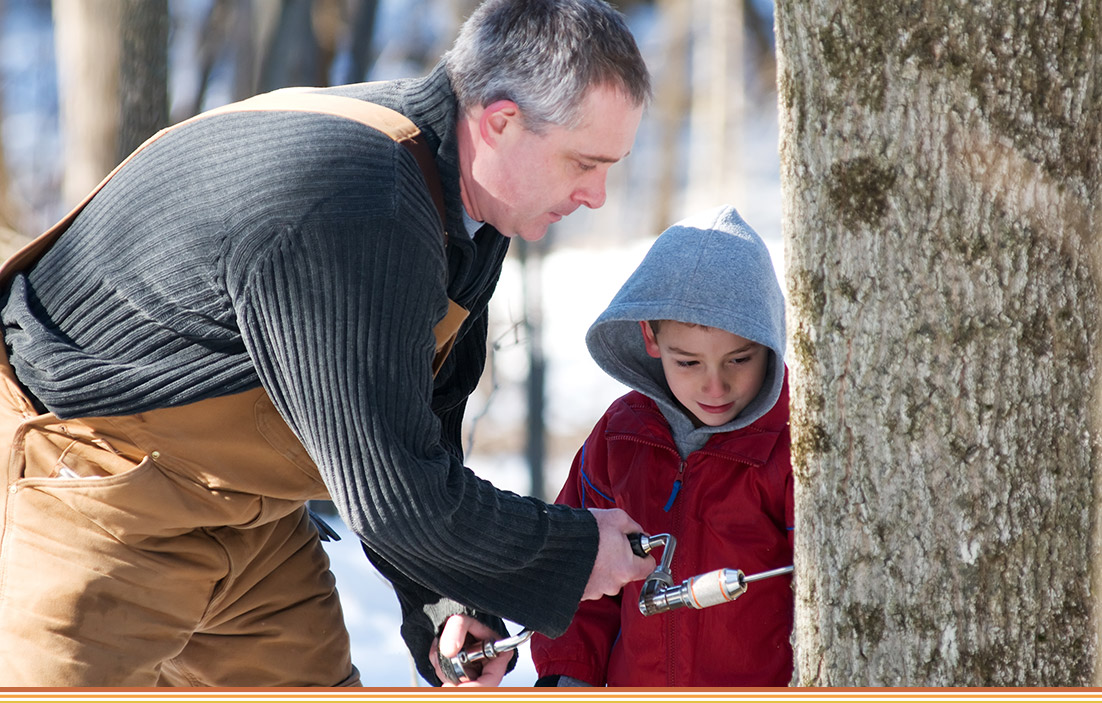 As we enter late summer, county and state fairs are in full swing celebrating the agricultural, horticultural, and creative endeavors of their local and regional producers. One product you may come across as you visit livestock barns, food booths, and rides is maple syrup. Since its discovery, maple has been and remains a local product.

Maple is a local product because of the specific region it comes from. Maple syrup can be produced only in the Northeastern part of North America. The majority of the world’s maple syrup comes from Canada, while the Northeastern United States adds to the global supply. Although maple trees can grow in a wider area, maple syrup production is confined to this specific region because of its climate, which is ideal for sugar maple growth and sap production. In order for maple sap to flow for collection, there must be cold nights with temperatures below freezing followed by relatively mild temperatures in the daytime. This region’s late winter and early spring offers this particular climate, making it ideal for maple syrup production.

Maple syrup has always been a local product. First Nations peoples in Canada and various Native American tribes in the United States were collecting sap and using it to make a form of maple sugar and for cooking purposes long before Europeans arrived in the New World. Through interactions with Indigenous peoples, French settlers in Canada were producing maple sugar by the early 1600s, and English settlers in New England followed afterward. Through these colonies, Europeans got to taste maple for the first time, and it was well-liked, leading to further development in the colonies. Although farmers in the newly formed United States tried to move maple production further south in the late 1700s, they discovered the trees did not thrive like they did in the Northeast and Canada.

Throughout the centuries, maple production continued to develop with improved tapping, the creation of the sugarhouse, and other inventions like the evaporator, tubing, reverse osmosis machines, and more to help the area’s producers and bring about the maple industry as we know it today.

Since maple syrup is unique to such a specific area in the world, maple syrup production is a unique activity to those who live in that area. Whether a maple farmer who has an operation with thousands of taps or the hobbyist who boils sap on the kitchen stove for fun, maple producers are locals making maple products for their neighbors. Although maple syrup makes its way to places around the world, it retains its local-community feel. Maple producers are highly involved in their operations and have a heart for their consumers to make a good product, regardless of whether their maple syrup goes across the globe or across the street.

So, even though maple season may seem far away, remember the maple syrup you drizzle on your pancakes at breakfast or you see in the grocery store may come from somewhere nearby. Your neighbors or others near you may be maple makers themselves – look for them in the maple tent at the fair. As much of agriculture looks ahead to the harvest, remember to celebrate your local maple producers and the unique harvest they’ve already completed for you!

About Real Maple: Real Maple is the only natural sweetener made from one botanical ingredient – maple sap – with no added colors or flavors. 100% pure maple syrup is a natural sweetener that contains vitamins and minerals that help maintain and support a healthy body. Real Maple truly is The Smarter Sweetener. Keep up with Real Maple on Facebook and Instagram (@userealmaple) for nutrition information, fun facts, recipes, and more!