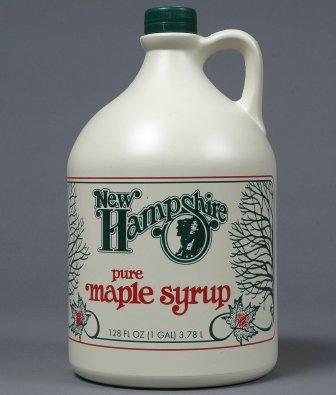 Maple syrup production is a key part of NH’s working landscape. Maple syrup is produced by collecting sap from maple trees. This is done by tapping maple trees and collecting the sap that flows out with tubing. Smaller operations or hobbyists may still use the old-fashioned method of hanging buckets on the taps, while larger producers have elaborate vacuum and tubing systems. Sap is then boiled to make maple syrup and other maple products.

When thinking of agriculture most people think of tractors plowing fields or cows being milked, but maple syrup is an agricultural crop that is produced in the woods. A maple producing forest is sometimes referred to as “sugarbush.” Much like agricultural fields, sugarbushes need to be maintained and cared for in order to remain productive. Keeping these forests in operation is something some NH maple producers consider to be an important contribution to the state. Rich and Jackie Menge of Maple Leaf Farm in Lyme said, “I think a big thing is that we are keeping the land in agriculture. It is giving us an incentive to not develop the property.” Similarly, Matthew and Barbara Patch of Patch Orchards in Lebanon said of their contribution, “We keep land open in the state of NH…and we are keeping it in farming.”

Maple is one of the top ten of agricultural crops produced in the state and in 2020 New Hampshire produced about 4% of the United States’ total maple crop. While sugarbushes produce sap for maple syrup during the maple season, all year round they contribute to a healthier environment, are habitat for many animals and birds, and provide recreation opportunities for people.

This month be sure to visit a local sugarhouse to see and taste the sweet maple products of the season in New Hampshire! To find a sugarhouse near you, visit the NHMPA website at www.nhmapleproducers.com.